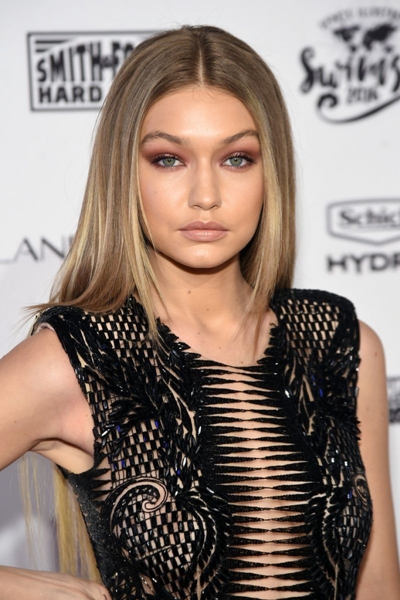 Fashion Model Gigi Hadid is now on the right way to chase success in this competitive era of showbiz. This beautiful young and talented American model has raised her name in a very short time period. Jelena Noura Hadid is much famous with her TV name as ‘Gigi Hadid’ and have raised her name and fame from a reality TV series ‘The Real Housewives of Beverly Hills’ where her mother Yolanda has also been staring since season 3. Well; Initially Gigi was interested to be a supports girl and want to be an athlete but after graduating she start following her mother and build her interest in modeling. So in the sake of modeling career she travel to New York City to pursue her occupation as a fashion model. In the beginning Gigi appears in the cover pages of various famous fashion magazines and peoples start knowing her. Later that her appearance in the reality TV series made her famous and she became a most prestigious fashion model of new age. Hope you is also among fans of Gigi Hadid and want to know all about her family and relationship history. Have a look below for it!

Gigi Hadid’s mother name is ‘Yolanda Hadid’ who is also a reality TV personality; while Gigi’s father name is ‘Mohammed Hadid’ who is real estate developer and has also been stared in the real housewives of Beverly Hills TV series. Gigi belongs to a half Muslim and half Dutch descent from her father and mother respectively. Her biological parents have been separated but they are still appearing in the show and are dealing with together for their business and showbiz.

Gigi Hadid boyfriend name is ‘Zayn Malik’ who is an English famous singer. Both they meet in November 2015 and since that time to now them are dating together and have announced their passionate love and plan for wedding soon. Moreover they have been stared together on various awards shows and magazines covers and now recently a news about both of them is released that they are moving in to the Zayn Malik’s Los Angeles home declaring that they can’t be apart for more than 10 days.

Well before Zayn Malik, Gigi has also been in relation with singer ‘Cody Simpson’ and ‘singer Joe Jonas’ but she break up with both of them and said that she did never love any of them as she loves with Zayn.

She is older than of her sister ‘Bella Hadid; (also a model) and brother ‘Anwar Hadid’. Her parents were separated afterwards and she has also 2 half-sisters from her father’s side and 5 step sisters from her stepfather side.

This versatile rising youngster was born on 23rd April in 1995. She is currently in her 21st year of age and going to celebrate her 22nd birthday in 2017.